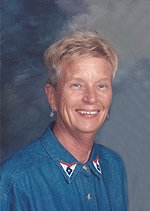 Janet H. Shuff, age 71, of Yankton passed away on Saturday, January 11, 2014 at Avera Sister James Care Center, Yankton. Funeral services will be 2:30 PM, Thursday, January 16, 2014 at St. John's Lutheran Church, Yankton with Rev. Dave Gunderson and Rev. Steve Weispfennig officiating. Burial will be in the Mission Hill Cemetery, Mission Hill, SD. Visitations will begin at 5:00 PM, Wednesday, January 15, 2014 at the Opsahl-Kostel Funeral Home and Crematory, Yankton with the family present at 6:00 PM. Visitations will resume one hour prior to the service at the church. Pallbearers will be her grandchildren: Christopher Jasso, Amanda Wenzlaff, Lydia Nelson, Jennifer Teichroew, Jacob Wenzlaff, Gabe Wenzlaff, Ryan Shuff, and Garrett Shuff. Honorary pallbearers will be her Sunday School Students and countless years of daycare children. Janet Helen was born to Ray and Marie (Westlund) Magorien in Yankton, SD on July 9, 1942. She was united in marriage to F. Ross Shuff on August 30, 1959. For years, she was employed by the Human Services Center. Janet was also a long time child care provider. Her love for children was endless and she was known by many as Grandma. She was a member of St. John's Lutheran Church and taught Sunday school for a number of years. Those who will forever cherish her memory are her husband, F. Ross Shuff of Yankton, SD; two sons, Brent (Renee) Shuff of Hudson, WI and Justin (Beth) Shuff of Deerfield, WI; two daughters, Meshelle (Rod) Jasso Hartman of Yankton, SD and Angela Shuff of Yankton, SD; twelve grandchildren; 7 great grandchildren; four sisters: JoAnne Dreesen of San Antonio, TX, Margaret Magorien of Columbus, NE, Linda Luken and Lois Hogate, both of Dakota Dunes, SD; many nieces and nephews. She was preceded in death by her parents, brother, Lyle Magorien, two sisters, Ilene Hamburg and MaryAnn Magorien, several nieces and nephews.
To send flowers to the family or plant a tree in memory of Janet Shuff, please visit Tribute Store
Services for Janet Shuff
There are no events scheduled. You can still show your support by sending flowers directly to the family, or planting a memorial tree in memory of Janet Shuff.
Visit the Tribute Store
Share A Memory
Send Flowers