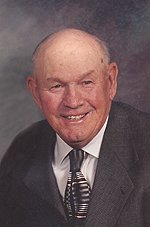 Edward V. Cwach, age 96, of Yankton, died peacefully, Tuesday, January 28, 2014 at the Avera Sacred Heart Hospital, Yankton, SD. Mass of Christian Burial will be 10:30 AM, Saturday, February 1, 2014 at St. Benedict Catholic Church, Yankton, with Rev. Ken Lulf officiating. Burial will be in the Sacred Heart Cemetery, Yankton. Visitations will begin at 5:00 PM, Friday, at the Opsahl-Kostel Funeral Home & Crematory, Yankton, with a Rosary at 7:00 PM, followed by a video tribute and Scripture service at 7:30 PM. Visitations will resume one hour prior to the service at the church. Edward Victor Cwach was born October 24, 1917 in rural Yankton, SD to Victor and Katherine (Hacecky) Cwach, the third of six children. He attended Yankton County schools and was confirmed at Sacred Heart Church and later became a member of St. Benedict Catholic Church. He married Violet Hlavac on May 14, 1941. Edward was a fourth generation Yankton County farmer and farmed his entire life with his wife and later with his son. Together, Edward and Violet had five children, 10 grandchildren and five great-grandchildren. Edward was an avid Cvik card player and loved polka music, particularly Molly B. He enjoyed watching his grandchildren's activities and attended as many as he could. Edward always had a positive attitude and inspired his friends and family with his passion for life. He was an inspiration and mentor of sound values and had a strong work ethic. He will truly be missed by his family and friends. Edward is survived by his four daughters: Bonni Teegarden of Pleasantville, IA, Betty Cwach of Yankton, SD, Maggie (Dave) Larsen of Marshall, MN., and Jan (Robin) Grossenburg of Yankton, SD; daughter-in-law, Mary Cwach of Yankton, SD; ten grandchildren: Lori (Brian) Shoning, Ted (Veronica) Teegarden, Andrea Teegarden, Chad (Liz) Larsen, Mary Beth Teegarden, Katie Larsen, Dan (Michelle) Cwach, Kevin Cwach, Jeff Grossenburg and Jenna Grossenburg; five great-grandchildren: Victor, Oliver and Miranda Teegarden, and Bennett and Rory Larsen; his sister, Lenore Law; and many nieces and nephews. Edward was preceded in death by his wife, Violet, son Gary Cwach, infant twins, brother, Melvin Cwach, and sisters, Evelyn Celmer-Welte, Delores Klimisch, and Mary Jane Gall.
To send flowers to the family or plant a tree in memory of Edward Cwach, please visit Tribute Store
Services for Edward Cwach
There are no events scheduled. You can still show your support by sending flowers directly to the family, or planting a memorial tree in memory of Edward Cwach.
Visit the Tribute Store
Share A Memory
Send Flowers