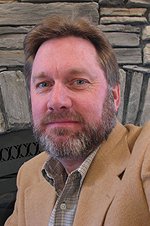 Ralph G. Hagge, age 52, of Sioux City, IA, passed into eternity and into the open arms of his Lord and Savior, Jesus Christ on Wednesday, January 29, 2014 at Mercy Medical Center, Sioux City, IA, after a courageous four-year battle with cancer. Funeral services will be 4:00 pm Saturday, February 1, 2014 at Central Baptist Church; 4001 Indian Hills, Dr.; Sioux City, IA, with Rev. Lloyd Grant officiating. Visitations will begin at 2:30 pm, Saturday, at Central Baptist Church. Visitations will continue Sunday, February 2, 2014 from 1:00 to 5:00 pm at the Aisenbrey-Opsahl-Kostel Memorial Chapel, Menno, SD, with the family present from 3:00 to 5:00 pm. Funeral services will be 10:00 am, Monday, February 3, 2014 at the Salem Reformed Church, Menno, SD, with Rev. Michael Hecht officiating. Burial will be in the West Our Savior's Cemetery, rural Menno, SD. Visitation will resume one hour prior to the service at the church. Ralph Gideon Hagge was born on March 25, 1961 to Calvin Walter and Cornelia Louise (Mettler) Hagge in Yankton, SD. He was named in honor of his paternal grandfather, Ralph B. Hagge and maternal grandfather, Gideon Mettler. Ralph spent the first 18 years of his life growing up and working on his parents' farm located six and one-half miles southwest of Menno on the James River. Ralph attended Menno Public School and graduated in 1979. Ralph then went onto South Dakota State University (SDSU) at Brookings, SD and earned an Associates of Science degree in General Agriculture in 1981. He returned to the family farm and farmed with his father for four years. He later decided to return to SDSU and study electrical engineering. Ralph earned a Bachelor of Science degree in Electrical Engineering and graduated with High Honors in 1989. During the last year of college, Ralph met Dawn A. Haase. They were married on June 3, 1989 in Menno SD. God blessed Ralph and Dawn with three beautiful and wonderful daughters: Audrey Dawn, Emily Louise, and Abbey Arlene. Ralph considered his children to be God's greatest blessing to him. Ralph was a hardworking, faithful, and dependable man who was blessed with intelligence, wit, and humor, but above all an enduring faith in and love of his God and Savior. Ralph considered himself to be blessed by God with health, prosperity, and happiness. Ralph also came to believe that just as God had given him great blessings and prosperity, God, in His infinite wisdom and unquestionable sovereignty, also brought him to experience great difficulties and heart-rending sorrows in his earthly life (Isaiah 45:7). However, through God's faithfulness, he experienced great spiritual and emotional healing. Starting in 1989, Ralph worked for eight years at Mid-American Energy Company (formerly IPSC) in Sioux City and Storm Lake, IA, as a field engineer in electric substations. In 1997, Ralph worked for Electrical Consultants in Billings, MT, designing substation projects. After six months, Ralph returned to the Sioux City area and worked for Cannon Technologies for 11 years. In early 2008, Ralph began working with Northwest Iowa Power Cooperative (NIPCO) in LeMars, IA, as the substation operations and maintenance manager. In 2010 at the age of 49, Ralph was diagnosed with head and neck cancer which resulted in surgery and multiple rounds of chemo and radiation therapy over the next three years which left him with difficulty with speaking and eating. Ralph continued to work at NIPCO until cancer treatments made it impossible for him to carry out his responsibilities. To the very end Ralph continued to love, pray, and hope for the very best for his wife and children. Throughout Ralph's life and illness, he did as much as he possibly could, despite his circumstances, to love and provide for his family and encourage them in their faith in Jesus Christ. Blessed be the memory of his lifelong example of sacrifice and love for his family. Ralph is survived by his three daughters, Audrey Hagge of Orange City, IA, Emily and Abbey Hagge and their mother, Dawn Hagge all of Scotland, SD; his father, Calvin (Alice) Hagge of Menno , SD; his four sisters, Mary (William) Schoenfish of Menno, SD, Karen (Kevin) Brasser of Paullina, IA, Nancy (Jeffrey) Hanka of Hermosa, SD, and Susan (Dean) Fuerst of Huron, SD. Ralph is also survived by 15 nieces and nephews and two great nieces. Ralph was preceded in death by his mother, Cornelia (Mettler) Hagge; his grandparents, Karine and Ralph Hagge and Adella and Gideon Mettler; and two nieces.
To send flowers to the family or plant a tree in memory of Ralph Hagge, please visit Tribute Store
Services for Ralph Hagge
There are no events scheduled. You can still show your support by sending flowers directly to the family, or planting a memorial tree in memory of Ralph Hagge.
Visit the Tribute Store
Share A Memory
Send Flowers