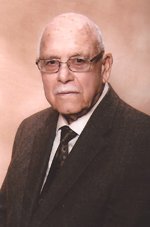 Ray G. Anderson, age 90, of Aberdeen, SD and formerly of Freeman, SD passed away Tuesday, March 25, 2014 at the Avera St. Luke's Hospital, Aberdeen. SD. Funeral services will be 11:00 AM, Saturday, March 29, 2014 at Our Redeemer Lutheran Church, rural Irene, SD with Rev. Dana Steinwand officiating and the United States Flag presentation by the SDARNGHG. Burial will be in the Bang Cemetery, Freeman, SD at approximately 1:15 PM Saturday afternoon with Military graveside rites by the Rames-Bender American Legion Post #152 Menno, SD. Visitations will begin at 5:00 PM, Friday, March 28, 2014 at the Aisenbrey-Opsahl-Kostel Memorial Chapel, Menno, SD with a Scripture service at 7:00 PM with Rev. Michael Hecht officiating. Visitations will resume one hour prior to the service at the church. We celebrate the life of Ray Gerhard Anderson, who was born June 14, 1923 to Arthur P. and Hannah (Christopherson) Anderson near Viborg, SD. Ray was baptized and confirmed at Elim Lutheran Church. His elementary education was at Rural School District 81, after which he attended Viborg High School, graduating with the class of 1940. In 1941 he enrolled at the University of South Dakota. Ray then enlisted into the United States Army Reserve in 1942. He was called into active duty in 1943, serving two and a half years in Italy with the 91st Infantry Division of the 5th United States Army. Ray was honorably discharged in November 1945. After his discharge, he re-entered the University of South Dakota. Ray graduated from USD in 1947 with a Bachelor of Science degree in Business Administration. After graduating from USD, he began working with International Harvester Company as an area representative in the Sioux Falls District Office. On May 9, 1948 he married Ilene Johnson at Bang Lutheran Church. To this union three children were born: Debra, Rodney and Mark. They lived the early years of their life together in Rapid City, Sioux Falls, and Worthington, MN. They then began farming on Ray's family farm southeast of Freeman. In 1964 Ray and Ilene purchased the International Harvester dealership in Freeman in partnership with Earl and Marian Gering. The business was renamed Freeman Implement. Ten years later Ray and Ilene sold their interest in Freeman Implement to Earl and Marian and returned to farming on the land that was Ilene's family farm, rural Freeman. They continued to farm in partnership with their son Mark. In 2006, Ray's greatest love, his wife, Ilene passed away. In 2008 Ray moved from his family farm to Dewald Street Apartments in Freeman, then in 2012, he moved to Bethesda Towne Square, Aberdeen. Ray enjoyed traveling. The travel highlight was the trip to Norway and Sweden with Ilene. Ray and Ilene also enjoyed many warm winters in Arizona. After a fulfilling life, Ray passed away Tuesday, March 25, 2014 at Avera St. Luke's Hospital in Aberdeen at the age of 90. Grateful for having shared his life are his children: Debra (Dale) Aman of Aberdeen, SD, Rodney (Robin Cooley) Anderson of Houston, TX, Mark (Teresa) Anderson of Freeman, SD; four grandchildren: Kristi Balken of Highlands Ranch, CO, Steve Aman of Englewood, CO, Dakota Cooley of Houston, TX, Taylor Anderson of Freeman, SD; and two great grandchildren, Carter and Ella Balken. Preceding him in death was his wife, Ilene, his parents, Arthur and Hannah Anderson, and his brothers, Jerome and Glenmore.
To send flowers to the family or plant a tree in memory of Ray Anderson, please visit Tribute Store
Services for Ray Anderson
There are no events scheduled. You can still show your support by sending flowers directly to the family, or planting a memorial tree in memory of Ray Anderson.
Visit the Tribute Store
Share A Memory
Send Flowers