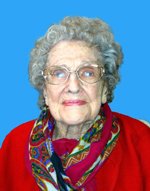 Anne Marie Renner died January 26, 2014. A rosary is scheduled at 10 AM on Thursday, June 19, 2014 at Sacred Heart Catholic Church in Yankton, South Dakota followed by a Memorial Mass at 10:30 AM. Visitations will be one hour prior to the Mass at the church. Interment of cremated remains will be in the Sacred Heart Cemetery. Opsahl-Kostel Funeral Home and Crematory, Yankton is in care of the arrangements. Anne was born December 31, 1919 to Albert and Rosy (Rada) Rokusek and was raised on a farm in the Tabor, South Dakota area. She attended school in Tabor and graduated from Tabor High School in 1937. Anne then attended Mount Marty Junior College in Yankton, with a focus on commercial studies. On July 31, 1943 Anne married Tony Renner in Van Nuys, California, where he was stationed with the Army Air Force 475th Fighter Squadron prior to deployment to the South Pacific. Upon returning to Yankton, Anne was employed as a receptionist in the office of Dr. William Krall. In later years, she was employed in the insurance offices of Don Cadwell and Ken Schneider. Anne was a member of Catholic Daughters, Sacred Heart Church and the Sacred Heart funeral choir. She also served as Eucharistic Minister at the Adult Day Center, Avera Sacred Heart Hospital, and was a member of the VFW Post 791 Auxiliary. Anne and Tony were active supporters of the Mount Marty College basketball teams and enjoyed golfing, playing bridge, and socializing at the local Elks and Hillcrest Country clubs for many years. Anne was an accomplished seamstress and enjoyed cooking and baking as well. Her cinnamon rolls, kolache, and potato dumplings were specialties she shared with family members and friends. Anne is survived by children Barbara and Harvey Levenson of Atascadero, California; Ruth and Todd Kline of Hastings, Nebraska; and John Renner and Mark Hamilton of Palm Springs, California; grandchildren: Jennifer and Kevin Warner, Matt and Lynn Morgan, Mark and Damien Levenson, Scott and Courtney Kline, Burke and Andrea Kline, and Brynn Kline and great-grandchildren: Brianna Levenson, Lucy Elizabeth Kline, Ellie and Katelyn Kline, and Kyler Warner. Anne is also survived by many loving nieces and nephews, among whom Joe Renner of Tabor, and John and Barb Schneider of Yankton were so generous in their support. Anne was preceded in her death by her husband of 67 years, Tony, and by their children, Mark Renner and Charlotte ("Char") Morgan, and by her sister, Lillian Schneider, her brother, Wenceslaus ("Jimmy") Rokusek, and her parents. In lieu of flowers, the family has requested that donations be made to their local Hospice provider.
To send flowers to the family or plant a tree in memory of Anne Renner, please visit Tribute Store
Services for Anne Renner
There are no events scheduled. You can still show your support by sending flowers directly to the family, or planting a memorial tree in memory of Anne Renner.
Visit the Tribute Store
Share A Memory
Send Flowers