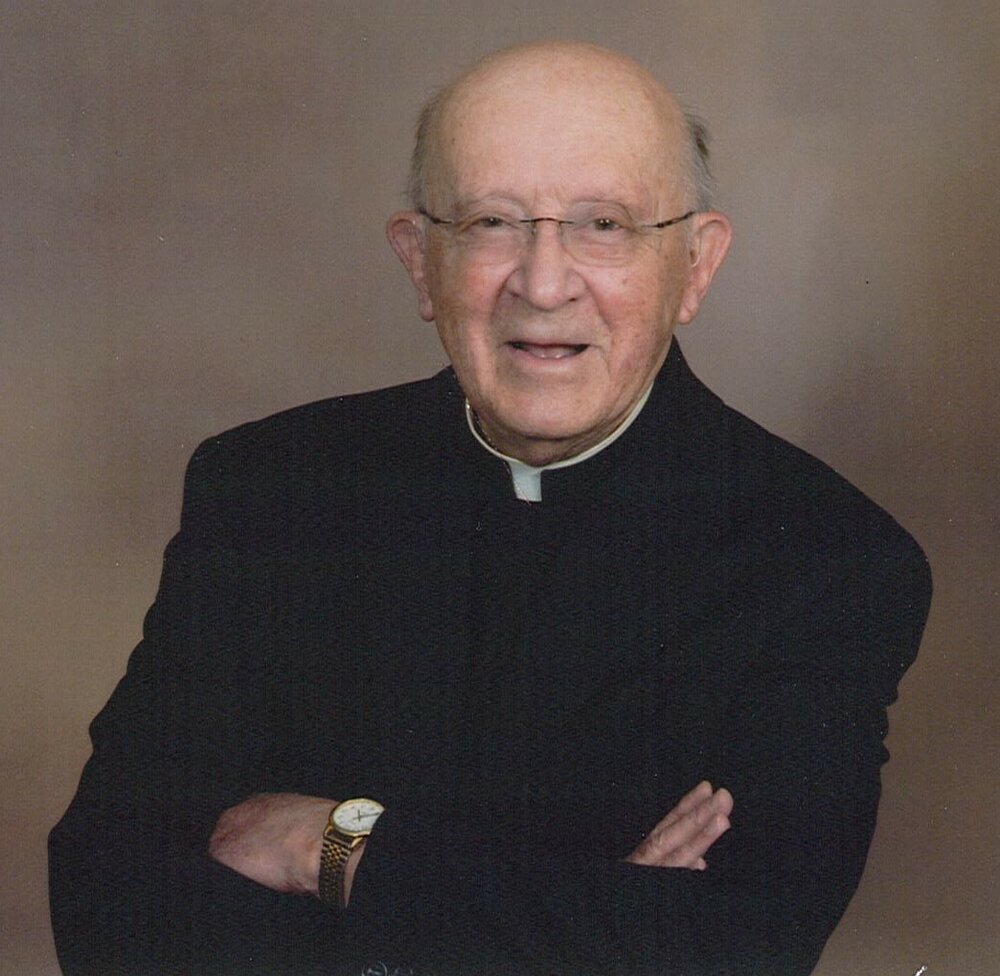 Please share a memory of Msgr. Carlton to include in a keepsake book for family and friends.
View Tribute Book

Msgr. Carlton P. Hermann, age 95 of Yankton, SD passed away on Saturday, April 16, 2022, at Avera Sacred Heart Hospital in Yankton.  Mass of Christian Burial will be 10:00 AM, Friday, April 22, 2022, at Sacred Heart Catholic Church with The Most Reverend Donald DeGrood officiating.  Burial will be in the St. Mary’s Cemetery, Roseville, IA at approximately 1:00 PM, Wednesday, April 27, 2022, with Rev. Richard Baumberger officiating.  Visitations will be 5 to 7 PM, Thursday, April 21, 2022, at Sacred Heart Catholic Church with a Wake service at 7:00 PM.  Visitations will resume one hour prior to the service at the church.  The Opsahl-Kostel Funeral Home & Crematory, Yankton, SD has been trusted with the service details.  Online condolences may be sent at: www.opsahl-kostelfuneralhome.com.  Uninterrupted live streaming of Msgr. Hermann’s Mass can be found at:  https://my.gather.app/remember/msgr-carlton-p-hermann.

Carlton Peter Hermann was born on February 5, 1927, in Rockford, IA.  One of four children, he was the only son born to Carl and Lydia (née Vala) Hermann.  Carlton received the sacraments of baptism on February 13, 1927, and confirmation on November 20, 1939 in Saint Mary Church in Rockford, IA.

He attended the Pontifical College Josephinum in Worthington, OH, beginning with high school seminary and then continuing with college and major seminary.  Originally his seminary studies were sponsored by the Archdiocese of Dubuque.  However, he was later released to Sioux Falls on account of the need within the Diocese and its rural character.  On June 7, 1952 he was ordained to the priesthood at St. Turibius Chapel at the Josephinum by the Most Reverend Amleto G. Cicognani, Apostolic Delegate to the United States.

Upon his ordination, Father Hermann served as an associate pastor at Cathedral, then at Saint Anthony, Hoven, and Saint Augustine, Bowdle.

In 1959, Father Hermann began a series of pastoral appointments that would take him to St. John the Baptist, Lesterville, St. Agnes, Sigel, St. Thomas, De Smet, St. Paul, Iroquois, Christ the King, Webster, St. Lawrence, Milbank, and St. Wenceslaus, Tabor.   His pastorate at St. Wenceslaus, which included St. John the Baptist, Lesterville in the final two years, would last for 19 years until his retirement from assigned ministry in July of 1997.

On September 17, 1995, Father Carlton Hermann was honored by Pope John Paul II as a prelate of honor and received the title of Monsignor.

In his years as a Senior (retired) priest, Monsignor remained very active in the Yankton area, presiding at liturgies in the parishes and at Marty Council gatherings of the local Knights of Columbus as well as at Catholic Daughters of the Americas gatherings.  Monsignor frequently offered sacramental ministry to the infirm and staff at the South Dakota Human Services Center and the inmates at the Federal Prison Camp in Yankton.  He has provided sacramental ministry at the Lewis & Clark Boy Scout Camp and the House of Mary Shrine regularly.  Particularly in his later years, he offered the sacraments to the residents of Avera Majestic Bluffs Senior Living Facility before ultimately joining them as a resident himself.

He served alongside Father Pius Mardian as the Co-Vicar for Retired Priests during Bishop Carlson’s episcopal shepherding of the diocese.  At an earlier point in his priesthood, he served the Diocesan Church on the Priest Senate.

Among the many distinctions in his priestly ministry, Monsignor always seemed glad to have begun the infamous “Polka Mass” in Tabor as part of its annual Czech Days celebrations.  He was a lifetime member of the Czech Heritage Preservation Society and spent every Wednesday evening for many years having dinner and pie with the Sisters of Sacred Heart Monastery. Those who had the privilege of encountering Monsignor in his years as a Senior Priest found him to be always eager for a good conversation and sure to be present at the next potluck or parish dinner.  He has been a fixture at the weekly “priest meals” held in Yankton, sharing wisdom gained from his 70 years of priestly ministry and encouraging his brother priests to persevere in the faith.  He is perhaps best remembered for his witness of remaining positive in his disposition toward all persons and all things, even ones with the greatest challenge.  He was always happy to take the leftovers home with him.

To send flowers to the family or plant a tree in memory of Msgr. Carlton Hermann, please visit Tribute Store
Thursday
21
April