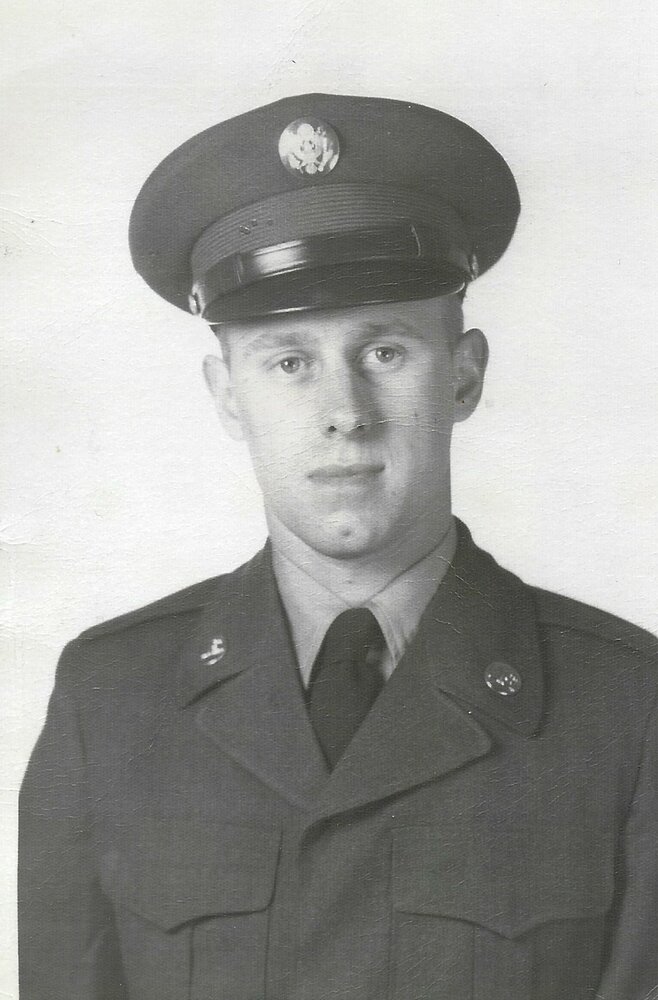 Please share a memory of Delano to include in a keepsake book for family and friends.
View Tribute Book

Delano Klaudt, age 87, of Menno, SD passed away Saturday, September 18, 2021, at the Menno-Olivet Care Center, Menno, SD.  Private graveside services will be held with Rev. Theresa Jacobson officiating and Military Graveside Rites by the Rames-Bender American Legion Post #152 and the SDARNGHG.  The Aisenbrey-Opsahl-Kostel Memorial Chapel, Menno, SD is assisting with the service details.  Online condolences may be sent at: www.opsahl-kostelfuneralhome.com.

Delano Klaudt was born February 10, 1934 in Dolton, SD to Edmund and Martha Klaudt.  He was baptized on April 29, 1934 and confirmed on April 25, 1948 at Grace Lutheran Church where he was a lifelong member.  Delano attended Menno Public School and graduated on May 15, 1952.  He enrolled at the University of South Dakota where he completed two years of education toward a Business Administration degree.

In 1956, Delano enlisted in the United States Army where he served from November 9 through November 7, 1958.  Having been stationed near Paris, Delano took advantage of experiencing Europe and much of what it had to offer.  During this time, his parents joined him for a scenic tour of numerous countries which provided him with many, wonderful lifelong memories.  Undoubtedly, one of Delano’s European highlights was purchasing a 1958 Volkswagen off the assembly line in Mainz, Germany and having it shipped back to the United States via steamship.

After being honorably discharged from the Army, Delano returned to Menno and joined his dad and brother at Klaudt Service.  In 1963, after the untimely death of Edmund, Delano and his brother, Archie, began a 45-year partnership that continued their dad’s legacy. On September 10, 1972, Delano was united in marriage with Arlene G. Biorseth at Our Savior’s Lutheran Church.  Throughout the years, Arlene remained steadfast in her support of Delano’s work at Klaudt Service.  She also was diligent in caring for him as he experienced declining health.

Although soft-spoken and humble, Delano’s renowned wealth of mechanical expertise was greatly respected by many.  His kindness and generosity contributed to his exceptional commitment to serving, which remained a constant during his lifetime.

Those grateful for having shared Delano’s life include his wife of 49 years, Arlene, and his sisters, Darlene (Ralph) Schulenberg, Celesta (Marlin) Herrboldt and sister-in-law, Judy Weber.  Delano is also survived by many nieces, nephews and other relatives and friends.  Special recognition is given to the associates of Klaudt Service.  Delano regarded the employees as family and truly enjoyed working with them.

On behalf of Delano, his family extends sincere gratitude and appreciation to the Menno-Olivet Care Center for the daily comfort provided during his stay.

To send flowers to the family or plant a tree in memory of Delano Klaudt, please visit Tribute Store

Look inside to read what others have shared
Family and friends are coming together online to create a special keepsake. Every memory left on the online obituary will be automatically included in this book.
View Tribute Book
Services for Delano Klaudt
There are no events scheduled. You can still show your support by sending flowers directly to the family, or planting a memorial tree in memory of Delano Klaudt.
Visit the Tribute Store
Share A Memory
Send Flowers
Plant a Tree