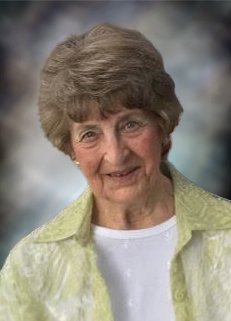 Please share a memory of Orpha to include in a keepsake book for family and friends.
View Tribute Book

Orpha Jean Winter, age 95 of Parkston, SD died on Friday, May 14, 2021 in her sun filled room at her daughter’s home in Yankton after a short period of declining health.  Funeral services will be 11:00 a.m. Wednesday, May 19, 2021 at Parkston Congregational Church, 209 W. Teak, Parkston, SD with the Rev. Kenn Leischner officiating.  Burial will be in the Parkston Protestant Cemetery.  Visitation will be 5 to 7:00 p.m. on Tuesday, May 18 at the church.  There will also be visitation for one hour prior to service time on Wednesday.  Live streaming of Orpha’s services will be at:  https://www.facebook.com/opsahlkostel/live.  Online condolences may be made at:  www.opsahl-kostelfuneralhome.com.  Arrangements are under the direction of Opsahl-Kostel Funeral Home and Crematory in Yankton.  Pallbearers will be Cameron Winter, Jack Elbracht, Bill Neuheisel, Kerry Murtha, Brian Spaans, and Brad Spaans. Honorary Pallbearers will be Nathan Arora, John Bergman, Bernard Kastein, Michael Sinovic, Myron Leibert, and John Duarte.

Orpha was just a month short of her 96th birthday.  Her three children sat vigil by her bedside as her five grandchildren came from across the country to say “good-bye.”  She was a fighter who did not “go gently into that good night,” but when medical options were exhausted, she used her remaining days to comfort her family, share stories with her grand and great-grand-children, and share smiles and laughter with old friends.

Orpha was born June 19, 1925, to Daniel and Bertha (Hoffman) Widmer on their family farm, east of Parkston.  Orpha grew up as a hard-working farm girl with her two brothers, Elmer and LeRoy, and this strict work ethic would prove to be one of the dominating aspects of her life.  She would always be happiest when there were things to do, jobs to complete and projects to finish.  The fruits of her labors – great cooking, beautiful gardens, impeccable needlework marked by the special artistry of her crochet work and a richly nourishing home – were a gift she bestowed with unflinching energy and love…and boundless curiosity.  She always saw something exciting over the next hill.

Orpha met her future husband Curtis Winter when she was a young girl visiting her brother in College at Southern Normal School.  Despite her youth at the time, she told her mother, “This is the boy who I will someday marry.”  Six years later in 1945, when Curtis returned from fighting in the European theatre during World War II, they re-met in the downtown Parkston Corner Cafe, and after a breathless romance, were married.  Their three children would remember their boundless open affection, and their love of dancing.  They danced together for the rest of their married life, which was cut short by Curt’s untimely death in 1982.

Books were a passion for Orpha, so it was not surprising that she became a teacher.  After her children grew older, she enrolled in Southern State Teacher’s College, and through summer school and night school ultimately graduated with a bachelor’s degree in Elementary Education.  She taught for several years at various country schools and was ultimately employed by the Parkston Public School system, teaching primarily in 3rd grade.  She continued to teach for the next 35 years, retiring in 1988.  She was known for her huge bulletin board displays, which changed every month, her emphasis on reading skills, her precise organization…and her fairly firm discipline.

Along with this full-time occupation, Orpha assisted Curt in his seed and nursery business, motivated her children to excel academically, embraced her Christian faith through church and Sunday school devotion, and excelled in being the most adventurous, fun-loving grandma that any child ever had.  In later years, her beautiful patio with all of its plants became the meeting place for friends and neighbors who always found welcome, and a good cup of coffee.

Orpha was preceded in death by her husband and dance partner, Curtis Raymond Winter, grandsons Gavin John and Christian Paul Winter, brothers Elmer and his wife Ina, and LeRoy Widmer.  Her family are grateful for the courage of her convictions, the fierceness of her support, the power of her practiced example…and the fact that she was the best companion and conversationalist anyone could have on a car ride.

To send flowers to the family or plant a tree in memory of Orpha Winter, please visit Tribute Store
Tuesday
18
May