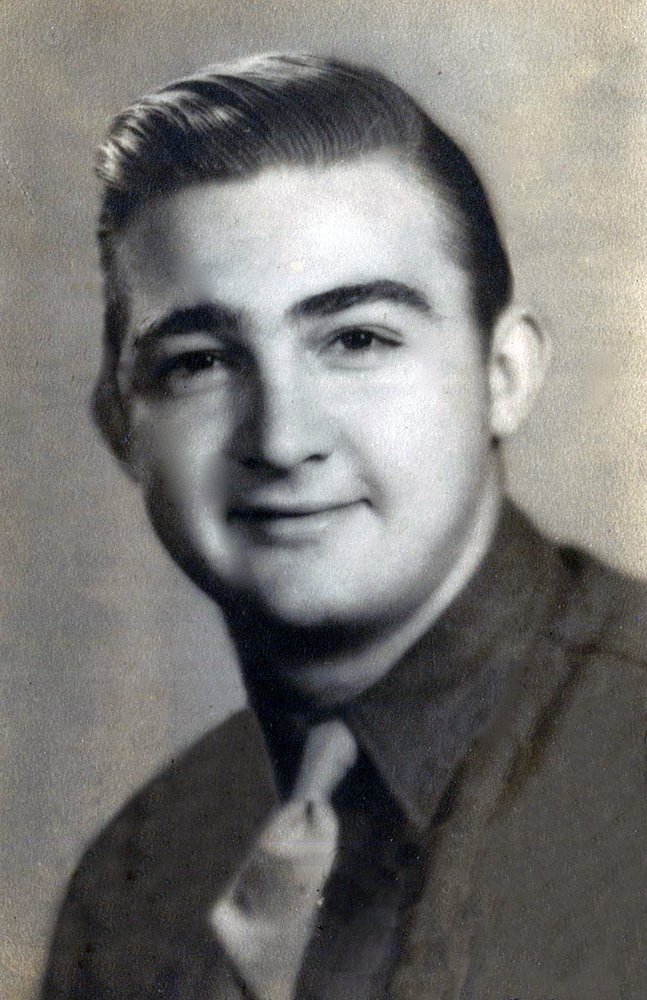 Please share a memory of Willard to include in a keepsake book for family and friends.
View Tribute Book

Willard H. Lynch, age 97 of Yankton, SD passed away on Saturday, March 6, 2021 at Angelhaus East in Yankton.  A visitation for family and friends of Willard will be 5 to 7:00 p.m. Friday, March 12, 2021 at Opsahl-Kostel Funeral Home and Crematory in Yankton.  Burial will be at 1:00 p.m. Saturday, March 13 at Sacred Heart Cemetery in Yankton with Military Honors conducted by Ernest Bowyer VFW Post 791 of Yankton and SDARNG Honor Guard.  Those wishing to attend either event are asked to wear a mask and to practice social distancing guidelines.  Online condolences may be made at:  www.opsahl-kostelfuneralhome.com.  Arrangements are under the direction of Opsahl-Kostel Funeral Home and Crematory in Yankton.

The warmth of his family embraced Bill Lynch as his leapt into the ethereal fold during the early morning hours of March 6, 2021. As you read this think deeply about the richness of your life and thank men like Bill who sacrificed to liberate and to protect others.

Character is built block by block and Willard “Bill” Lynch’s first was the Father he never knew. Bill was born in Yankton on September 13, 1923 and his Father Harry died in 1925. His Mother Martha was left to raise five children. The six of them ate a lot of corn meal mush and oatmeal. He watched her struggle, but her family remained intact. “How she survived I don’t know.”

Bill’s childhood home at 709 Mulberry had no running water or toilet. They gathered water from a cistern and from a nearby well pump. Bath time for the five kids was a big tub. A friend once asked, “How come you’re so interested in athletics?” “They had showers!”

As a member of the Yankton High School class of 1943 Bill was busy. He was the homecoming king, the president of the student council, and he earned 10 letters in football, basketball and track. He was bestowed with the first “white Y,” given to the finest graduating athlete. The wise Bob Winter suggested that Bill Lynch may have been the finest athlete that Yankton ever produced.

“I couldn’t wait to get into the service once the war started!” However, after basic training, his troop train stopped in Yankton on his way to the East Coast. He jumped off, ran home, and spent about two hours with his Mother. She was his foundation.

The USS General A.E. Anderson cut through the blue ocean waters to deliver Bill. As a replacement infantryman in L Company, 30th Regiment, 3rd Division, he landed at Anzio in January of 1944. It was hell on this earth. Within minutes of hitting the beach he saw death. “I had never even been to a funeral before. That kind of opened your eyes.” “Now I realize that I am not at Yankton High School.”

Night after night of walking on scout patrol in water and mud and then freezing temperatures caused Bill’s trench foot. “I couldn’t walk,” Bill said. “I didn’t know my feet were frozen until I was ordered for patrol. They had to cut my shoes off.”

He was moved to an evacuation hospital, but it wasn’t safe. “The Germans were unloading bombs on tents with Red Crosses. They strafed us. Men were screaming and nurses were trying to calm us down. We were fish in a barrel. Finally, I was put aboard a ship to Naples.”

He recovered enough to wade ashore near St. Tropez in southern France. Just like at Anzio, Bill was back with Battle Patrol, an elite group of soldiers chosen from within the 3rd Division. Their job was to join the beaches. As they arrived at a lighthouse, “Everyone was gone, but the coffee pot was still hot.” They quickly achieved their goals and pushed off toward the Rhone River Valley. Somewhere near Orange, France, shrapnel sprayed Bill and he treated again at the 23rd General Hospital.

As Bill’s ship passed through the Straights of Gibraltar, he heard that the second atomic bomb had been dropped. His ship was diverted from the Pacific to New York City. Bill’s eyes moistened with tears as he saw the Statute of Liberty. He joked that, “Everyone had a girl to kiss but me!”

Just as he was to be discharged, he contracted tuberculosis. He convalesced for seven months at the Fitzsimons General Hospital in Denver. After his discharge on January 22, 1946, he tried to play football at Yankton College, but the nerve damage in his feet was too much. It was another war sacrifice. Like many veterans, he avoided past war stories and lived for today.

The dream of many young, Yankton men is to chase girls from Northeast Nebraska. Bill caught one from Bow Valley; he married Alice Stevens on July 23, 1951 at the Sacred Heart Church in Yankton.

Bill and Alice raised five sons, all of whom were 1st or 2nd team all-state footballers. The Lynch name was synonymous with tough football. He was so proud of his sons he often attended practice. Bill and Alice never missed a game, frequently driving with Jane Hawk to the away games. Bill taught his young men to respect the coach.

As an outstanding Buck, it was appropriate that Bill was inducted into the fifth class of the Yankton Athletic Hall of Fame. Bill’s attention has infrequently veered away from Bucks and Gazelle games.

Combat veterans are so happy to safely return home that they seek a slower pace. Sitting in a boat and casting a line to catch a fish was just right. Bill found the perfect job for an angler. He was the Manager of the Gavin’s Point Aquarium for many years.

It is difficult to overstate just how much Bill enjoyed fishing. He claimed that he fished every day for many years. He even kept a diary. He was serious, which is why his buddies arranged for him to be the state champion for the largest smallmouth buffalo. His record still stands!

Bill died at the age of 97. When you live such a long life, you lose others. His beloved Alice passed in 2015 and sons Mike (Liz) and Dan thereafter. But he was so happy to see his sons Bob (Kristi) of Byron, IL, Tom of Fort Lauderdale, FL, and Pat of Yankton, and to have been a part of the lives of his six grandchildren and three great-grandchildren.

If you love Yankton like Bill, then please make a gift to the Bill Lynch Family Scholarship Fund in Bill’s memory. Had Bill known of your gift, he would likely smile and chuckle, run a hand through his silver crewcut and remind you that the Bucks play in the State Basketball tournament in Rapid City beginning on March 18th. Go Bucks!

To send flowers to the family or plant a tree in memory of Willard Lynch, please visit Tribute Store
Friday
12
March

Share Your Memory of
Willard
Upload Your Memory View All Memories
Be the first to upload a memory!
Share A Memory
Send Flowers
Plant a Tree