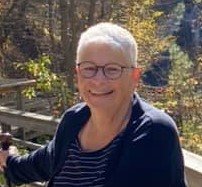 Please share a memory of Kathleen to include in a keepsake book for family and friends.
View Tribute Book

Kathleen “Kathy” (Schons) Ollestad, age 70 of Yankton, SD passed away peacefully on Monday, March 1st 2021 at Avera Sacred Heart Hospital in Yankton following a stroke and went home to her Savior in heaven.  A Celebration of Life for Kathy is being planned for a later date.

Kathy was the eldest child of Patricia and Larry Schons, was born on March 21, 1950 in Fargo, ND. She was raised in Moorhead, MN and was baptized at St. Mary’s Catholic Cathedral and confirmed at St. Francis de Sales. She graduated from Shanley High School in Fargo and earned her Associates Degree in Nursing (RN) from Rochester School of Nursing (Mayo Clinic) in 1970. She married Michael Somes in 1970, and had two children, Chris and Lisa. She was divorced and later married Clarence Ollestad in 1978. They lived in Moorhead until 1988 and then moved to Gonvick, MN where they lived together until Clarence passed away in 2008. Kathy and Clarence opened their home and hearts to many children over the years, including exchange students and those in need. After Clarence’s passing Kathy remained in the Clearbrook-Gonvick area for a few years; she eventually moved to Pine River, MN then Yankton, SD to be closer to her children and grandchildren.

Kathy worked as an RN until her retirement in 1993. She was active in her church community, most recently Yankton Assembly of God. Her faith in her savior Jesus Christ was extremely important to her and was the center of her daily life. Kathy also enjoyed sewing, reading, gardening, stitching and making Christmas ornaments every year. She loved to spend time with her family, especially her grandchildren and great-granddaughter.

Later this summer Kathy will be laid to rest next to the love of her life, Clarence, in Clearbrook, MN.

To send flowers to the family or plant a tree in memory of Kathleen Ollestad, please visit Tribute Store

Look inside to read what others have shared
Family and friends are coming together online to create a special keepsake. Every memory left on the online obituary will be automatically included in this book.
View Tribute Book
Services for Kathleen Ollestad
There are no events scheduled. You can still show your support by sending flowers directly to the family, or planting a memorial tree in memory of Kathleen Ollestad.
Visit the Tribute Store
Share A Memory
Send Flowers
Plant a Tree