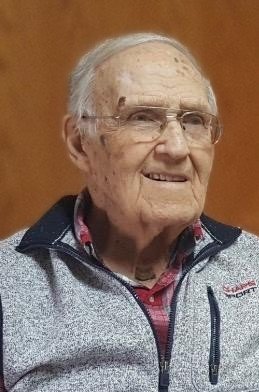 Obituary of Lloyd B. Seger

Please share a memory of Lloyd to include in a keepsake book for family and friends.
View Tribute Book

Lloyd B. Seger, age 95 of Yankton, SD passed away, peacefully, Tuesday, February 23, 2021 at his residence, Avera Majestic Bluffs Assisted Living, Yankton, SD.  Private family funeral services will be 10:30 AM, Monday, March 1, 2021 at Trinity Lutheran Church, Yankton, SD with Rev. Jeff Otterman officiating.  Burial will be in the Thabor Lutheran Cemetery, Wausa, NE at approximately 1:30 PM, Monday afternoon with Military Graveside Rites by the Bloomfield VFW Post #4996 and the Army National Guard Honor Guard.  Walk through visitations will be 5 to 7 PM, Sunday, February 28, 2021 at the Opsahl-Kostel Funeral Home & Crematory, Yankton, SD.  Due to COVID-19 concerns, friends and family are encouraged to participate through live streaming of Lloyd’s services at:  https://www.facebook.com/opsahlkostel/live.  Those wishing to attend the visitation in person are required to wear a mask and to practice social distancing guidelines.  Online condolences may be made at:  www.opsahl-kostelfuneralhome.com.

Lloyd was born in Wausa, Nebraska on March 16, 1925, to Carl and Millie Seger.  Lloyd grew up on the family farm in Dowling Township north of Wausa.  Lloyd treasured his time on the farm and enjoyed sharing stories of his time on the homeplace.  He was a member of Thabor Lutheran Church, baptized on April 19, 1925, and confirmed on July 21, 1940. He attended country school at McKinley School and graduated from Wausa High School in 1942.

Lloyd worked a variety of jobs in the area until he was drafted into the army in 1945.  He received basic training at Camp Fannin, Texas.  In July of 1945 he furloughed at home with his family before traveling by train to Ft. Ord, California, where he prepared to deploy as rifleman replacement in the invasion of Japan. At the beginning of his 33-day trip across the Pacific, the peace treaty was signed.  Lloyd would uncomfortably say he was “selfishly thankful” for the atomic bomb.  He then volunteered as a cook with the 5th Air Force and served in the occupation of Japan. He often told his family that he couldn’t help in the kitchen at home because he only knew how to cook for several hundred men.  Lloyd was honorably discharged in October of 1946 and returned to help on the family farm as well as working as a farm hand around Wausa, in South Dakota and in Colorado.  When his younger brother Wesley returned from Korea and took over the family farm, Lloyd moved to Newman Grove, Nebraska, where he worked in the local lumber yard.

Lloyd met Muriel Berner, and they married on October 5, 1958, at Grace Lutheran Church in Norfolk, Nebraska.  After a honeymoon to Wisconsin that included the final two games of the 1958 World Series, they made their home first in Newman Grove and then in Central City, Nebraska.  Lloyd and Muriel moved to Yankton in 1962 where they made their home together. Their marriage was blessed with three daughters: Shirlyn, Yvonne, and Joan. Their family continues to grow as the girls married and blessed them further with eight grandchildren and five great-grandchildren.  Lloyd loved spending time with his family and enjoyed every moment together.

Lloyd worked as a city mail carrier in Yankton until his retirement in 1987. He and Muriel were active members of Trinity Lutheran Church.  Lloyd enjoyed bowling for Kip’s Inn, afternoon coffee at Sunshine, and spending time with neighbors, friends and family. Following Muriel’s death in 2001, Lloyd remained in Yankton until the time of his death.  In his later years, Lloyd enjoyed volunteering at Sacred Heart Hospital as a Team member, meals at The Center, the Community Forum, attending local events, going on several bus trips and spending time with family.  While at Majestic Bluffs, Lloyd enjoyed attending musical performances, church services, hymn sings and Bible studies and as always visits from family and some very special friends. Lloyd was very proud of his Swedish heritage, was an avid Nebraska Cornhusker football fan and a lifetime member of VFW Roy Carlson Post 5824 in Wausa, Nebraska.

To send flowers to the family or plant a tree in memory of Lloyd Seger, please visit Tribute Store
Sunday
28
February