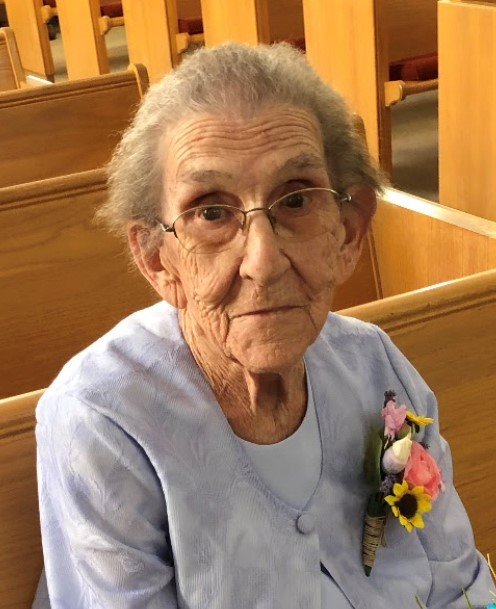 Please share a memory of Irene to include in a keepsake book for family and friends.
View Tribute Book

Irene M. Kulish, ag 95 of Lesterville, SD passed away Monday, February 08, 2021 at the Menno-Olivet Care Center, Menno, SD.  Funeral services will be 2:00 PM, Saturday, February 13, 2021 at the Opsahl-Kostel Funeral Chapel, Yankton, SD.  Burial will be in the Nikodym Cemetery, Utica, SD.  Walk through visitations will begin at 12:00 PM and continue until service time on Saturday afternoon.  Due to COVID-19 concerns, friends and family are encouraged to participate through live streaming of Irene’s services at:  https://www.facebook.com/opsahlkostel/live.  Those wishing to attend in person are asked to wear a mask and to practice social distancing guidelines.  Online condolences may be made at:  www.opsahl-kostelfuneralhome.com.  Arrangements are under the direction of Opsahl-Kostel Funeral Home and Onsite Crematory, Yankton, SD.  Pallbearers will be – Ron Trotter, Brian Munkvold, Phil Murphy, Alex Wollmann, Jim Kulish and Dylan Tacke.

Irene was born on October 16, 1925 to Frank and Emelia (Vaith) Kolda in Lesterville, SD.  She graduated from Lesterville High School.

Irene was united in marriage to Frank Kulish on September 16, 1944 and to this union 3 children were born:  Don, Donna and Ron.

Irene was employed at the Nancy Home as a nurse’s aide, Yankton Care Center and Human Services Center in the laundry department.

Her biggest pride and joy came from working on the farm.  Chickens, ducks and milking cows were her favorite. Listening to Frank’s accordian and drumming brought much enjoyment over the years.  Baking kolaches and rohliky were a holiday tradition for all to enjoy. If you left grandma’s house hungry, that was your own fault.  Filling her heart with love later in life was her grandchildren and great grandchildren.  Grandma kept a watchful eye on others by sitting in her garage watching the cars go by in the big Town of Lesterville.

To send flowers to the family or plant a tree in memory of Irene Kulish, please visit Tribute Store
Saturday
6
February