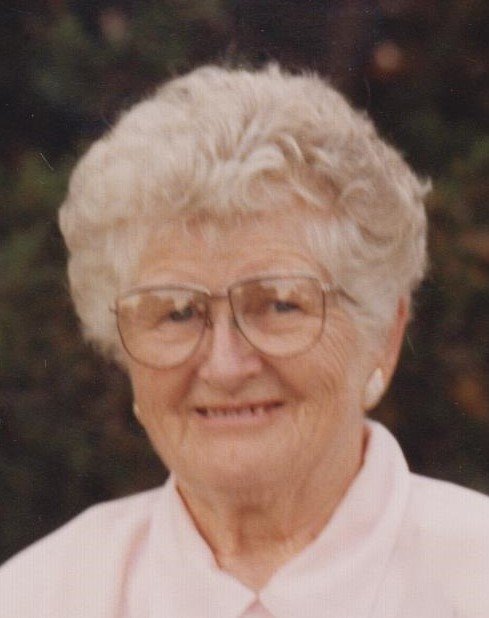 Theresa Marjorie Curtice, the oldest daughter of John and Theresa (Slowey) Gemmill, was born on September 30, 1917 on a family farm southeast of the Mayfield Store.  She was raised on the family farm.  She went to high school during the depression and moved into Yankton to work as a nanny/cook/housekeeper for a family in return for room and board.  This arrangement allowed her to attend Yankton High School and graduate in 1936.

She went to work as a bookkeeper at Montgomery Ward in Yankton.  She met the love of her life, Emery Curtice.  They were married June 17, 1940 in St. Columba Catholic Church, Mayfield.  Job transfers took them to Washington, Missouri, where their oldest two children, Lawrence “Larry” and Geraldine “Jerri Ann” were born.  They moved to Poplar Bluff, Missouri, where their third child Robert “Bob” was born.  Other transfers took then to Jefferson and Danbury, Iowa.  In 1946, they moved back to Yankton, and adding six more children, Mary Ellen, Charles “Chuck,” Richard “Rick,” Patricia “Patti,” Donald “Don,” and Jane to their family.  Marge was a fulltime housewife for many years.  She was a self-taught seamstress, making all of her children’s clothes, and altering clothes for customers out of her home.  When her children were all in school, she was employed at a women’s clothing store, the JoEllen Shop, where she was in alterations.  She then managed Stevenson’s, another women’s clothing store, until her retirement.

Marge loved spending time with her family.  Her family was everything.  She loved visiting her children and relatives.  She helped babysit her grandchildren at any opportunity.  She loved attending sporting events and plays of her children and later her grandchildren.  She also loved watching the Bob Ross painting shows and eventually took up painting.  In her younger years, she was an excellent gardener and seamstress by necessity and later, a painter/artist out of joy.

She was a member of Sacred Heart Catholic Church and the Catholic Daughters of America.

To send flowers to the family or plant a tree in memory of T. Curtice, please visit Tribute Store
Thursday
5
November