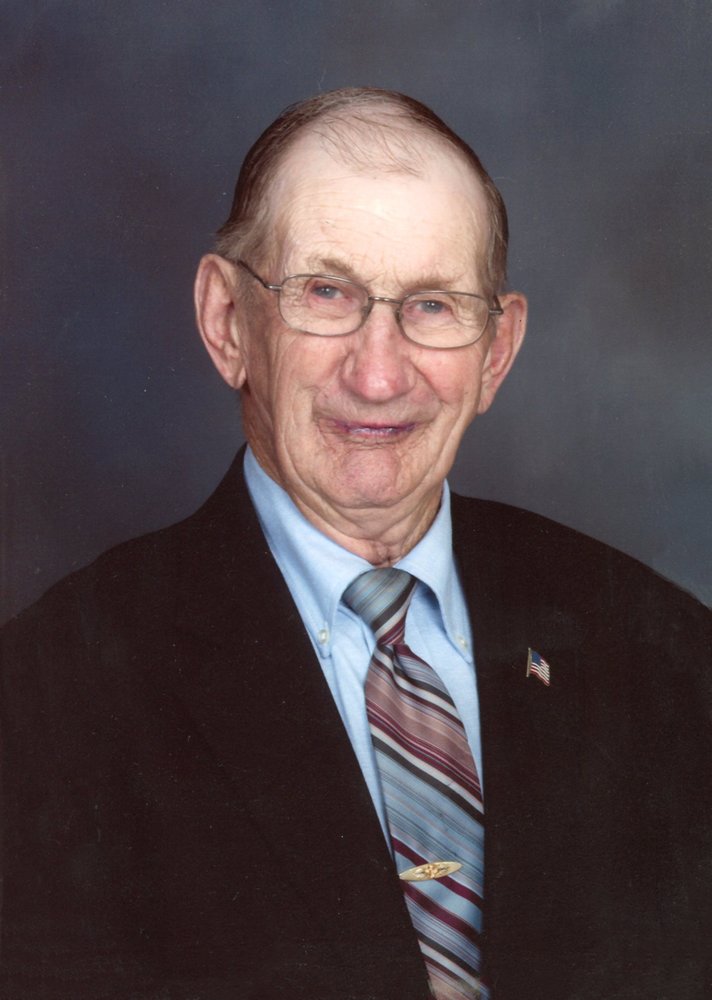 FISCHER ERNST Ernst J. ‘Ernie’ Fischer age 98 of Menno, SD passed away Thursday, April 23, 2020 at the Good Samaritan Society, Scotland, SD. Private family graveside services will be held at the Menno Cemetery, Menno, SD. Live streaming of the services will be at: https://www.facebook.com/opsahlkostel/live. The Opsahl-Kostel Funeral Home & Crematory, Yankton, SD is assisting with the service details. On line condolences may be sent at: www.opsahl-kostelfuneralhome.com. Pallbearers will be: Mike Fischer, Jeff Fischer, Corey Fischer, Nathan Fischer, Matthew Fischer, Jeremy Fischer, Keith Fischer, Joshua Fischer, Cody Fischer, Carter Fischer and Caden Simantel. Honorary pallbearers will be the rest of his 21 grandchildren and 28 great-grandchildren. Ernst was born to Fred and Martha (Guericke) Fischer on April 23, 1922 on the family farm southeast of Menno, SD. He was baptized at Peace Lutheran Church in Menno in June 1922 and confirmed July 11, 1937 at Peace Lutheran Church. Ernst married Ruth Schultz on March 6, 1949 at the Hutherdorf Church in rural Freeman with Rev. Peter J. Stahl officiating. Ernie decided to spend his 98th birthday in Heaven with Ruth; we can see them dancing and blowing out the candles on his birthday cake and celebrating their reunion. Ernst and Ruth milked cows, for many years, had stock cows, hogs and crop farmed. They raised their family near Lesterville, SD. Ernie’s hobbies were farming, farming, farming! He was a longtime member of Odessa School Board and sold Mallard Seed. He also enjoyed driving the casino bus in his later years. Ruth and Ernie organized the trips to Wagner and WinnaVegas Casino. He loved spending time with his grandchildren and touring all the farmyards of all his sons on a regular basis, until he couldn’t drive any longer. He then relied on Jill’s driving skills and direction. He also loved taking pictures with disposable cameras. His memory will be cherished by his children: Don Fischer (Marlene Hauger) of Olivet, SD, Richard (Julie) Fischer of Lesterville, SD, LeRoy (Susan) Fischer of Kingsley, IA, Gary (Althea) Fischer of Lesterville, Steven (LaNae) Fischer of Lesterville, SD, Jill (Jeremy Abma) Fischer of Scotland, Jason (Carrie George) Fischer of Lesterville, SD, 21 grandchildren and 28 great-grandchildren; sisters, Olga Mehlhaff, Hildegard (Marvin) Mehlhaff and Bertha (Alton) Mettler; brother, Gebhardt (Marcella) Fischer; sisters-in-law, Ruby Fischer and Lorene Schultz and sister and brother-in-law, Amos (Geraldine) Schultz. Ernst was preceded in death by his wife, Ruth Fischer in 2002; parents, Fred and Martha Fischer; brother, Helmuth Fischer; sisters, Lorentine (Irwin) Waltz and Marie (Clinton) Mehlhaff; brother-in-law, Ruben Mehlhaff and numerous loved family members. Due to the Covid-19 restrictions, Expressions of Sympathy and memorials may be sent to one common address: Richard Fischer, 42964 S.D. Hwy 46, Lesterville, SD 57040 to be shared with all family members. Thank you for all the understanding during this difficult time.
To send flowers to the family or plant a tree in memory of Ernst Fischer, please visit Tribute Store
Services for Ernst Fischer
There are no events scheduled. You can still show your support by sending flowers directly to the family, or planting a memorial tree in memory of Ernst Fischer.
Visit the Tribute Store

Share Your Memory of
Ernst
Upload Your Memory View All Memories
Be the first to upload a memory!
Share A Memory
Send Flowers