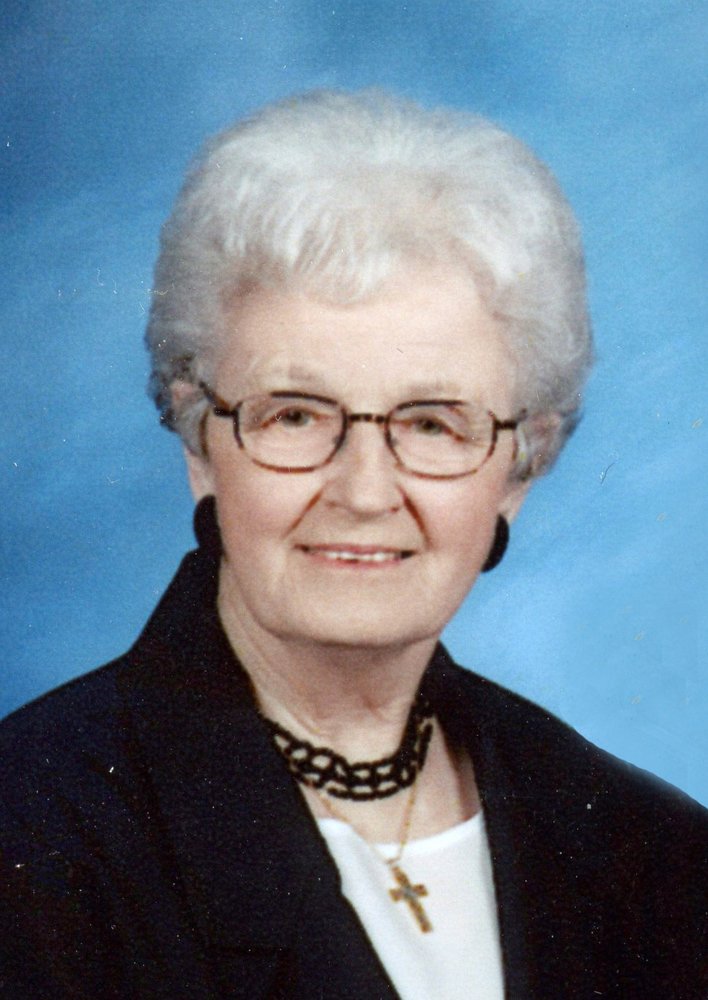 Agnes was born on September 4, 1919 to Stiny and Agnes (Schuch) Carda on a farm near Tyndall, SD. She was baptized and confirmed at St. Wenceslaus Catholic Church in Tabor. She attended the Richard Steckly Rural School, Bon Homme County.

She moved to Omaha, NE for a short time before moving back to Yankton, SD.  On January 12, 1942, Agnes was united in marriage to George Kocer.  Their son, Dan, was born in November 1942.  Agnes and George spent a big part of their lives farming in the Scotland and Tyndall areas.  During the ‘off times’ of farming, Agnes also worked at Gurney’s Seed and Nursery in Yankton, SD.  In 1984, Agnes and George retired from farming and moved to Tabor, SD.  In retirement, they enjoyed traveling to Canada, Mexico and various places in the U.S.  In October 2014, they moved to Autumn Winds Assisted Living in Yankton, SD.  On January 12, 2017, they celebrated their 75th Wedding Anniversary.

Agnes was an active member of St. Wenceslaus Church her entire life.  She was active in Altar Society and was a member of Catholic Workman (FSCLA), Czech Heritage Preservation Society, Tabor Chamber of Commerce, Farm Bureau and Farmer’s Union.

Among her favorite pastimes, Agnes enjoyed singing with the Tabor Troubadours, attending Czech polka dances at Beseda Hall and in surrounding towns.  She was proud of her Czech heritage and was often seen trying out her dramatic skills in Czech plays.  Bowling was another favorite activity, and she bowled in a women’s league for 40+ years.  She also loved playing Euchre and Pinochle in her card club and with family and friends.

Agnes will be remembered for her cooking and baking, especially Czech specialties like kolaches, and duck & dumplings with sauerkraut, and for her delicious pies.  She was gifted with a green thumb, and even when mother nature didn’t cooperate, Agnes had plentiful vegetable and flower gardens.  When she wasn’t busy gardening, she enjoyed watching the Minnesota Twins with George.

Grateful to have shared her life are her son, Dan (Pam) of Pequot Lakes, MN; grandchildren:  Lori (Matthias) Frasch of Minneapolis, MN, Jason (Jean) Kocer of Baxter, MN and John (Corinne) of Golden, CO; great-grandchildren:  Maxwell, Ellison & Stella Frasch, Noah and Emmarie Kocer and Henry and Charlie Kocer; her sister, Irene Kocer of Tabor, SD and many nieces and nephews and extended family.

Agnes was preceded in death by her parents; husband, George; sisters: Nettie, Mary, Anna, Vincie, Betty and Alice and several nieces and nephews.

To send flowers to the family or plant a tree in memory of Agnes Kocer, please visit Tribute Store
Thursday
30
May