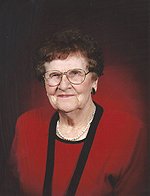 Helen Vlasak, age 97 of Tabor, SD passed away early Thursday, April 17, 2014 at Avera St. Michael's Hospital, Tyndall, SD. Mass of Christian Burial will be 10:30 AM, Friday, April 25, 2013 at St. Wenceslaus Catholic Church, Tabor, SD with Rev. Steven Jones officiating. Burial will be in the St. Wenceslaus Cemetery. Visitation will begin at 5:00 PM, Thursday, April 24, 2013 at the Opsahl-Kostel Memorial Chapel, Tabor with a wake service at 7:00 PM. Visitations will resume one hour prior to the service at the church. Helen Noll Vlasak was born on the homestead farm south of Tabor to Joseph J. and Sylvia (Ptak) Noll on June 18, 1916. She attended Tabor grade school, high school, and later attended business courses in night school while she worked in Omaha. She was employed as a housekeeper, a bookkeeper in the Tabor Bank, and was a group leader for Gurney Seed and Nursery Co. for fourteen seasons. She married Clarence Vlasak on June 6, 1939 and to this union, three sons were born: Richard, Joseph and David. Helen was a life member of the American Legion Auxiliary serving as president or chairman for forty years. Her elective offices were Unit, District, Department President and National Vice President of the Northwest Division. She was a National Committee Woman, an Area "D" National Rehabilitation Chairman, Area Communications Chairman, and Junior Activities Chairman, and also a life member of the Czech Heritage Preservation Society. Helen wrote an essay for the "Make A Difference Day" and won a monetary award for the Legion Auxiliary. Those funds are being used for the display of the casket flags of our veterans at her request. Helen wrote many, many poems for almost any occasion. She wrote four pageants for Tabor, the largest of which was the Bi-Centennial Pageant with over two hundred people in the cast. She was a memorial speaker for Legion and Auxiliary memorials, as well as a memorial speaker for the Czech days opening for the Czech Heritage Society. Her latest writings were that of humorous musical plays for the Czech Heritage Society in the Czech language. Travel played a very important part of their lives as she traveled to twenty national conventions of the Legion Auxiliary. Clarence and Helen took many trips throughout the United States and many trips to Europe, Germany, Italy, Australia and most of them to the Czech Republic. Helen served as a counselor for Girls State of the American Legion Auxiliary. She also taught classes in the Czech language, both in school and as a part of the Czech Heritage Program. Her ambition was to see Tabor have a museum and that mission was accomplished. Helen was a member of the St. Wenceslaus Catholic Church and a member of the church choir for over fifty years. She was the coordinator of the Polka Mass for many years and sang in the National Auxiliary chorus at two conventions. She took part in many plays, both in English and in the Czech language, both as a Sokol and for the Czech Heritage Club. Helen is survived by her sons, Richard (Carole) Vlasak and David (Rosemary) Vlasak; five grandchildren; and ten great grandchildren. She was preceded in death by her husband, Clarence, son, Joe (age 20), parents, three brothers, and one sister. In lieu of flowers, memorial donations can be made in her name to a charity or organization of your choice.
To send flowers to the family or plant a tree in memory of Helen Vlasak, please visit Tribute Store
Services for Helen Vlasak
There are no events scheduled. You can still show your support by sending flowers directly to the family, or planting a memorial tree in memory of Helen Vlasak.
Visit the Tribute Store
Share A Memory
Send Flowers