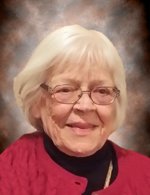 Marian Etta Buchholz, age 92 of Tyndall, SD passed away Sunday, July 06, 2014 at the Tyndall Good Samaritan Center, Tyndall, SD. Memorial services will be 11:00 AM, Saturday, July 12, 2014 at the United Methodist Church, Tyndall, SD with Rev. Ron Johnson officiating. Burial of her cremated remains will take place at a later date in Minnesota. Visitations will be one hour prior to the service at the church. The Opsahl-Kostel Funeral Home and Crematory is assisting the family. Marian was born on October 2, 1921 in Todd County, MN to Elmer & Ruth (Quance) Johnson. After finishing high school, Marian attended school to become a Certified Nursemaid (live-in nanny.) She worked for several families but the one she talked about most was that of Eero Saarinen. Mr. Saarinen was a famous architect, who designed the Dulles International Airport Terminal in Washington DC and The Gateway Arch in St. Louis MO. Marian continued to do nanny work in Washington DC during the days after she married Leslie Robert Buchholz, May 3, 1943 at Ft. Belvoir, VA. Les and Marian moved back to Hewitt, MN after Les finished active military duty. They had 4 children Mavis, Craig, Gail & Calvin. Many, many people were blessed by Marian's love of writing letters. She also sewed, knitted (mainly dish cloths), crocheted (mainly "scrubbies"), loved to play scrabble, baked excellent pies & cakes, gardened, canned, read many books, (especially "how to" books), traveled, sang in the church choir and helped out in many ways at her church and in her community. She was an amazing lady. Marian spent many of the Holidays with Calvin's family after they moved to SD in 2002. She came for Christmas in 2009 and due to a fall, was not able to go back to live in her home of 60+ years. She moved to North Point Apartments in August of 2010 and enjoyed her years there, spending most Sundays with Calvin's family. Marian moved to Good Samaritan Society, Tyndall on April 2, 2014 after a bout of pneumonia and entered hospice care on May 7, 2014. Left to mourn her absence are her sons, Craig (Linda) Buchholz of East Gull Lake, MN and Calvin (Debra) Buchholz and their children, Hannah & Jared, of Springfield, SD; daughter, Gail (Royal) Oyster of Thief River Falls, MN and their son, Leslie, of Crystal, MN. Marian became a great grandmother on May 14, 2014 when Leslie Oyster's daughter, Stella, was born. Marian was preceded in death by her parents; husband; brother, Duke; sister, Meredeth Seaver; two brothers, Dennis & Blaine; grandson, Adam Oyster and daughter, Mavis Buchholz.
To send flowers to the family or plant a tree in memory of Marian Buchholz, please visit Tribute Store
Services for Marian Buchholz
There are no events scheduled. You can still show your support by sending flowers directly to the family, or planting a memorial tree in memory of Marian Buchholz.
Visit the Tribute Store
Share A Memory
Send Flowers