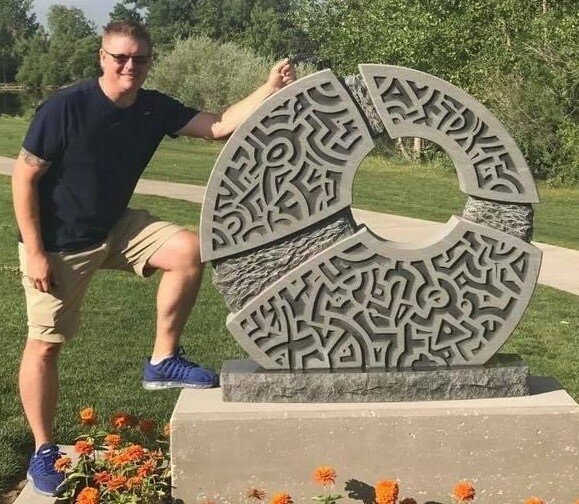 Please share a memory of Scott to include in a keepsake book for family and friends.
View Tribute Book

Scott Joseph Luken, age 52 of Yankton, SD passed away unexpectedly on Thursday, September 9, 2021, at Avera Heart Hospital in Sioux Falls, SD.   A memorial Celebration of Scott’s Life will be at 2 to 7:00 p.m. Tuesday, September 14, 2021, at Yankton’s Riverside Park, in the Territorial Capital Building.  A prayer service in Scott’s memory will be at 3:30 p.m. Wednesday, September 15, 2021, at Opsahl-Kostel Funeral Home and Crematory in Yankton with Rev. Thomas Anderson officiating.  Online condolences may be made at:  www.opsahl-kostelfuneralhome.com.  The Opsahl-Kostel Funeral Home and Crematory of Yankton is assisting the family.

Late last week we suddenly lost a legend. Scott Luken of Yankton, South Dakota, passed away very suddenly at the age of 52. Scott was an adored husband, father, friend, artist and community member. Scott was brutality honest, no nonsense and not afraid to call it like he saw it.  He loved good rum and was always an interesting conversationalist. Throughout his life, he graciously poured out time volunteering for community events and sharing his talents to make Yankton an even more beautiful place.

Scott was born in Yankton South Dakota on September 17, 1968, to Robert Luken and Yvonne Schwartz. Scott lived his life in its entirety within the community of Yankton where he worked for his father at Luken Memorials before leaving to start his own Scott Luken Sculpture Studio & Gallery early this year. He Married Angie Steinert Luken on July 18, 1992, and later added a daughter, Hailey, to the family in 1995.

Scott collected many accolades and was successful at many things over the years, but nothing compares to his compassion and will to help people. He was known by many as the guy who would drop anything to help fix a trinket, conceptualize big ideas in the art community or to spend time with his family and friends. He affected people in such an uplifting manner and will continue to be an inspiration to many.

He devoted countless hours of his life passing on his sculpting talents to many artists across the country as well as supporting new artists just starting out in their careers. His talent was simply amazing. He was inspired by the simplest of things and especially nature’s beauty.

In his final days with us on Earth, Scott was realizing his biggest dreams. He had opened Scott Luken Sculpture Studio & Gallery to share his works of art alongside other artists he admired. Additionally, he was hosting School of Hard Rocks in Yankton, an event he had been involved with for many years and admired deeply. This is a weekend intensive course with sculptors from across the nation in attendance to learn from Scott and other leading artists in the industry. Everyone was there to learn, laugh and develop their sculpting skills. This was the pinnacle of Scott’s dream and through the encouragement from his wife, Angie, and daughter, Hailey, the event continued as a tribute and celebration of the one-of-a-kind Scott Luken.

Scott’s legacy will continue through the hands of inspired artists as well as through his countless pieces of Art in communities near and far for decades to come.

Scott is survived by his wife Angie, Daughter Hailey and her fiancé Nick Bartels; his father and mother-in-law Stan and Diana Steinert and sister-in-law Kari Steinert; 4 sisters and one brother: Debora Hansen, Diane Zander, Tina Ziegler, Michelle Kathol and Bob Luken; and many, many friends. Scott was preceded by his parents Robert and Yvonne Luken.

Please join family and friends for a celebration of life at riverside park Dakota Territory Capital Building on Tuesday 9/14 from 2-7pm. Please don’t wear black! We are celebrating in true Scott fashion - in Tommy Bahama Hawaiian shirts or in his favorite color blue.

In leu of flowers, memorials may be directed to: The Scott Luken Memorial Fund at First Dakota National Bank at: 225 Cedar Street, Yankton, SD 57078 or to the Yankton Area Arts at 508 Douglas Avenue, Yankton, SD 57078.

To send flowers to the family or plant a tree in memory of Scott Luken, please visit Tribute Store
Tuesday
14
September