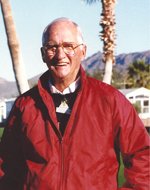 Gene R. Nelson, age 85, of Yankton passed away Wednesday, May 21, 2014 at the Avera Sacred Heart Hospital, Yankton, SD. Memorial services will be 11:00 AM, Tuesday, May 27, 2014 at the United Church of Christ (Congregational), Yankton, SD with Rev. Molly Carlson officiating. Visitations will be 6:30 to 8:00 PM, Monday, May 26, 2014 at the Opsahl-Kostel Funeral Home & Crematory, Yankton, and then one hour prior to the service at the church. Gene R. Nelson was born August 6, 1928 to Lawrence and Bernice (Brownlee) Nelson, in Yankton, SD. He went to school in Yankton until 1940 when his father was called to active military duty. He lived in Salinas, California and Bastrop, TX for three years. In 1944 he returned to Yankton to finish high school where he participated in football, basketball and track for Yankton High School and graduated in 1946. Shortly after graduating, he joined the Army and was stationed at Ft. Monmouth and Ft. Dix in New Jersey where he earned the rank of Sergeant in 1948. He returned to Yankton where he started college at Yankton College, but in 1950, the 196th Regimental Combat Team was activated for the Korean War. Prior to deployment, Gene married Barbara Robinson on August 19, 1950 in Pierre, SD. To this union, three sons were born: Dana, Kirby and Mark. Gene was stationed at Camp Carson, CO and at Ft. Richardson, AK until July 1951, and was discharged from the Army in 1952. He returned to Yankton College for the next two years and received a BA in 1954. While in college, he participated in track and was the President of the Student Body. In 1960, he received his Master's Degree from USD. Gene was employed as a teacher and coach in Wessington Springs, SD for six years. In 1960, he returned to Yankton as a history teacher and assistant football, basketball and track coach. In 1965 he became the assistant principal at Yankton High School until his retirement in 1987. His dream was to make a difference in the lives of Yankton youth. For the next 15 years Gene and Barbara traveled to the east and west coast, ending up in Apache Junction, Arizona at Road Haven Resort to live the life of a retiree, playing golf and having fun in the sunshine during the winter and returning to Yankton every summer. While in Road Haven, they met many wonderful new friends. In 2002, they returned to Yankton for health reasons. Gene was a member of United Church of Christ (Congregational), Yankton Quarterback Club, Yankton High School Booster Club and Hillcrest Golf Course. He is survived by his wife, Barbara; sons, Dana (Tanya Harris) and Mark; seven grandchildren and 2 great grandchildren. He was preceded in death by his parents, brother, Harold Nelson, and a son, Kirby Nelson. "Once a Buck always a Buck". The family requests donations to the Yankton High School Track and Field Program, Yankton High School, Activities Director, 1801 Summit Street, Yankton, SD 57078.