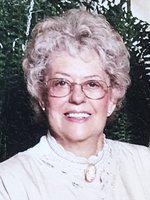 She was born May 3, 1931 to Leonard J. and Helen M. (Nelson) Wiese in Chicago, Illinois. She moved with her family to the Yankton area in 1936 and to Sioux City in 1945. Phyllis loved to share stories of her childhood during the Great Depression and spoke fondly of time spent on her grandmother's farm west of Yankton. Born into a musical family, she played in a Chicago children's orchestra at a young age and later performed with her parents and sister on local Yankton radio station WNAX.

Phyllis was a graduate of Central High School in Sioux City and married her high school sweetheart, Douglas G. Adam, on October 1, 1949, in Sioux City. It was there that they raised their family of five children: Brian, Brenda, Christopher, Courtney, and Eric. In 1962 they moved to an acreage near Stone State Park, which she named Meadowlark Hill Farm. Many beloved farm animals and pets were cared for during their twenty-five years there.

While in Sioux City, Phyllis taught children's dance classes, volunteered with the Jaycee Sues, and was an active member of Trinity Lutheran Church. She later pursued a nursing degree and had a lifelong interest in the medical field. She was an avid writer, penning her own novel as well as numerous short stories and poems enjoyed by her family.

During their retirement years, Phyllis and her husband lived in South Dakota and Florida, and had recently relocated from Sioux Falls to Yankton. She traveled extensively with him throughout North America, Europe, and Asia. Phyllis also enjoyed reading, playing piano, and gardening.

Family was of the greatest importance to Phyllis. She took pride in her pioneer roots and in her Danish and German heritage, with numerous heirlooms and family photographs on display in her home. She hosted countless family gatherings as well as fun-filled "Grandma Days" for her grandchildren, who also took part in clever scavenger hunts that she devised for them on holidays. Visitors to her home were warmly welcomed with coffee and homemade cookies, and old-fashioned candy jars were kept full for her grandchildren to enjoy.

Phyllis is survived by her husband of over seventy years, Douglas, the love of her life; her children Brian (Kay) of rural Yankton, South Dakota; Christopher of Yankton; Eric (Michele) of Dubuque, Iowa; and son-in-law Gary Palmer of Yankton; ten grandchildren; and six great grandchildren. She was preceded in death by her parents; her sister, Lois Smith; a son, Courtney Adam; and a daughter, Brenda Palmer.

A private interment will take place at Logan Park Cemetery in Sioux City, with arrangements by Opsahl-Kostel Funeral Home. Memorials may be directed to the Heartland Humane Society of Yankton.