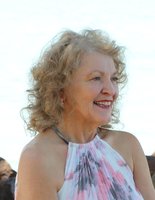 Peggy Sue Schmidt, age 59 of Yankton, SD passed away unexpectedly at her home Sunday, December 17, 2017.  Mass of Christian Burial will be 10:30 AM, Friday, December 22, 2017 at Sacred Heart Catholic Church, Yankton, SD with Rev. Larry Regynski officiating.  Burial of her cremated remains will take place at a later date.  Visitations will begin at 5:00 PM, Thursday, December 21, 2017 at the Opsahl-Kostel Funeral Home & Crematory, Yankton, SD with a rosary at 7:00 PM.  Visitations will resume one hour prior to the service at the church.  On line condolences may be sent at: www.opsahl-kostelfuneralhome.com.

Peggy was born June 3, 1958 in Colome, SD to Charles and Pauline (Leibel) Elliott.  She was baptized and confirmed at St. Isadore in Colome, SD.  Peggy married Steve Schmidt.  She worked at the Human Services Center for about five years.

Peggy was preceded in death by her parents, Charles and Pauline and sisters, Carol and Mary Lou.